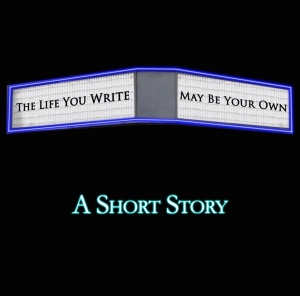 That’s the question Paula Prentis asks herself after the fictional events she’s written about start showing up on the evening news.

A successful screenwriter, Paula is suffering from writer’s block. She’s been asked to write a script about a woman whose deceased husband starts communicating with her from the other side. The only problem is: Paula doesn’t believe in an afterlife, and she thinks religions perpetuate false beliefs that can’t be proved.

She’s on a call with her agent when she receives an incoming call from her sister, Andrea, who lives in an ashram in Colorado. The two sisters haven’t spoken since their mother’s funeral three years earlier, but Andrea could be just the person to help Paula come to terms with her choices and lay the past to rest so she can move forward in a new direction.

“The Life You Write May Be Your Own” is available now in the Kindle store!

(A Kindle device is not necessary to read Kindle e-books; you can read on your phone, computer, or tablet.)

This site uses Akismet to reduce spam. Learn how your comment data is processed.